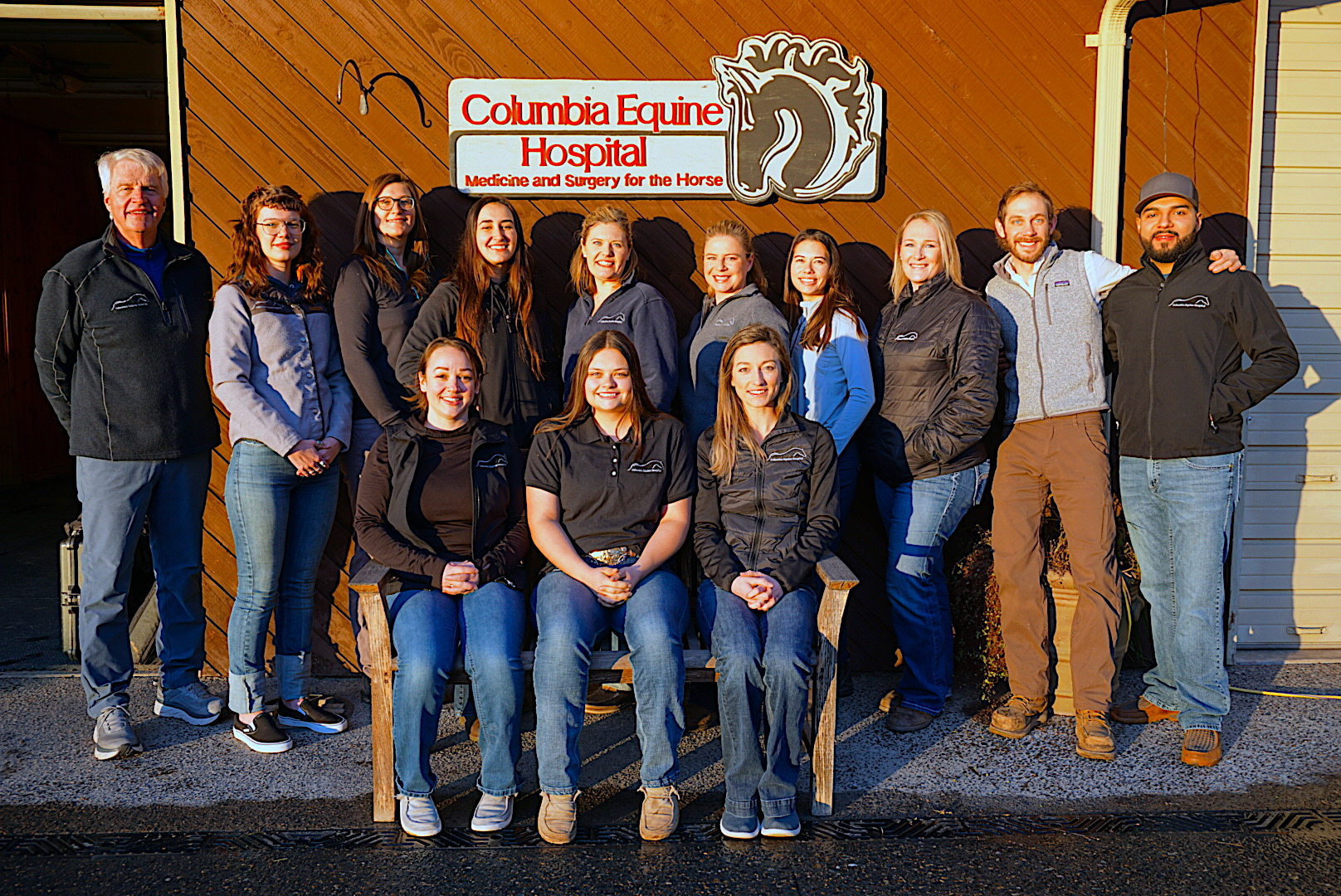 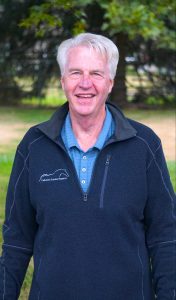 Dr. Scott Hansen has been interested in horses since his teens. He first pursued a career as a farrier in Nebraska after attending Oklahoma Farrier College. After being exposed to the equine veterinary medicine world while working for a year, Scott decided to become a veterinarian. He continued to work as a farrier while attending Iowa State University College of Veterinary Medicine until he graduated in 1980. He then moved to the Gresham area and opened a solo equine-only ambulatory practice in 1983, focusing primarily on race horses.

Scott’s interest in lameness and surgery grew while working at the track. He opened his current hospital in 1985 with a surgical facility to be able to provide a higher quality of care for his patients. His practice has grown much larger than he had ever imagined, with its emphasis shifting from racetrack work in the mid 1990s to sport horse and companion animal medicine and surgery.

Scott has remained intrigued by equine medicine by staying up to date with the latest technologies and advances in the field. Throughout his practice life, Scott has found the most rewarding aspect has been the people he has met and the horses he gets to work with everyday. His main interests have been lameness, surgery, farrier science, and diagnostic imaging. 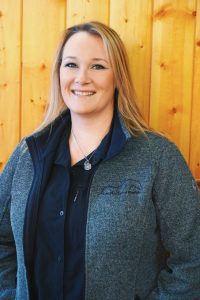 Dr. Christy Sandquist hails from the beautiful Applegate Valley in Southern Oregon. Horses have always been the center point of her life as an equestrian and in her career.

From a young age Christy relished her time in the saddle, whether it was exploring the beautiful Oregon landscape trail riding and horse camping or preparing for competition. Christy spent a number of years in 4-H, on her high school equestrian team, competing in open horse shows and representing Oregon State University on their intercollegiate equestrian team.

Christy’s professional training began at Oregon State University where she earned her bachelors degree in pre-veterinary medicine and equine sciences. Advancing her career, she then earned her Certified Veterinary Technician license in Oregon. Christy worked for years as a licensed technician in small animal emergency and critical care, small animal specialty surgery and all aspects of equine medicine. With a passion for medicine and to further her education, Christy pushed herself to earn admission into veterinary school. Christy studied at Oregon State University College of Veterinary Medicine and graduated with honors. Thereafter she completed an equine internship at Pioneer Equine Hospital in California. This is where she received advanced training in equine internal medicine, surgery, sports medicine, emergency and critical care, advanced imaging (including digital radiology, ultrasonography, edoscopy, MRI and CT), general anesthesia, dentistry and reproduction. Christy is dedicated to and passionate about all aspects of equine medicine and serving her equine patients in any way she can.

During her free time Christy can be found out enjoying the wonderful outdoors. Her adventures consist of traveling, hiking, camping and spending time with her family and friends. 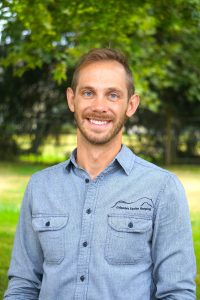 Paul Duff is a native to Columbus, Ohio. He learned to love horses after his family became involved in the cutting horse industry breeding and showing Quarter Horses. After graduating from Iowa State CVM, he completed a 1 year internship at Littleton Equine Medical Center, rotating between surgery, medicine, field, and emergency services. After the internship Dr. Duff returned to Columbus, OH to join Bella Vista Equine Veterinary Services, focusing on the performance horse. Dr. Duff also worked a breeding season in Colorado, focusing on the problem mare, semen processing, and neonatal care. He comes to the northwest excited to join CEH! His interests include reproduction, lameness, surgery, dentistry, and integrative medicine. In the free moments Dr. Duff loves all things outdoors, climbing, hiking, biking, playing music, and enjoying nature with his two dogs, Ellie and Rocky. 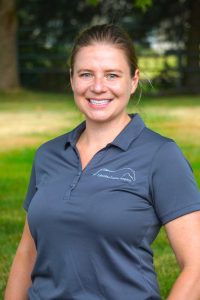 Dr. Mariya Pitel spent her childhood in rural Crimea on a family farm nestled between the vineyards and almond groves bordered by the Black Sea. While tending to her herd of goats and watching her aunt, a veterinarian at a large state-owned dairy, she learned to appreciate the bond between animals and their people. When later Dr. Pitel moved to California, she found herself right at home, surrounded by vineyards, ranches, and fruit orchards. Dr. Pitel earned both her BS and DVM degrees from UC Davis and spent a year as an intern veterinarian at Pacific Crest Equine before pursuing a residency in large animal internal medicine at Oregon State University. Following a year working as a staff veterinarian back at UC Davis, Dr. Pitel joined the AIM Team in Penngrove, CA, where she incorporated sports medicine. Dr. Pitel is a large animal internal medicine specialist, board certified by The American College of Veterinary Internal Medicine. Her professional interests include gastrointestinal disease, rehabilitation, acupuncture and nutrition.
In her spare time Dr. Pitel enjoys hiking and exploring the trails of the beautiful Oregon mountains with her dog Mishka, as well as riding (and soon driving) her horse Rudy. 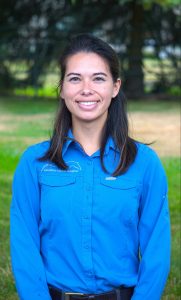 A California native, Dr. Lauren Taylor grew up as a Pony Club member and an avid competitor in the hunter/jumper circuit. As the daughter of a small animal veterinarian, she developed her passion for veterinary medicine at a young age. After graduating from UC Davis SVM, she completed a sports medicine internship at East-West Equine Sports Medicine with Dr. Duncan Peters and Dr. Lori Bidwell in Lexington, Kentucky. During that year, she was an official veterinarian at the National Sunshine Series and Desert Circuit in California, as well as the Great Lakes Equestrian Festival in Michigan. Lauren then returned to California to join Animals in Motion, a specialty practice for performance horses. She is an FEI permitted treating veterinarian and an active member of the International Society of Equine Locomotor Pathology (ISELP). Her interests include sports medicine, rehabilitation, and diagnostic imaging.
In her free time, Lauren enjoys adventuring with her dog Memphis, climbing, traveling, boxing, and playing music. 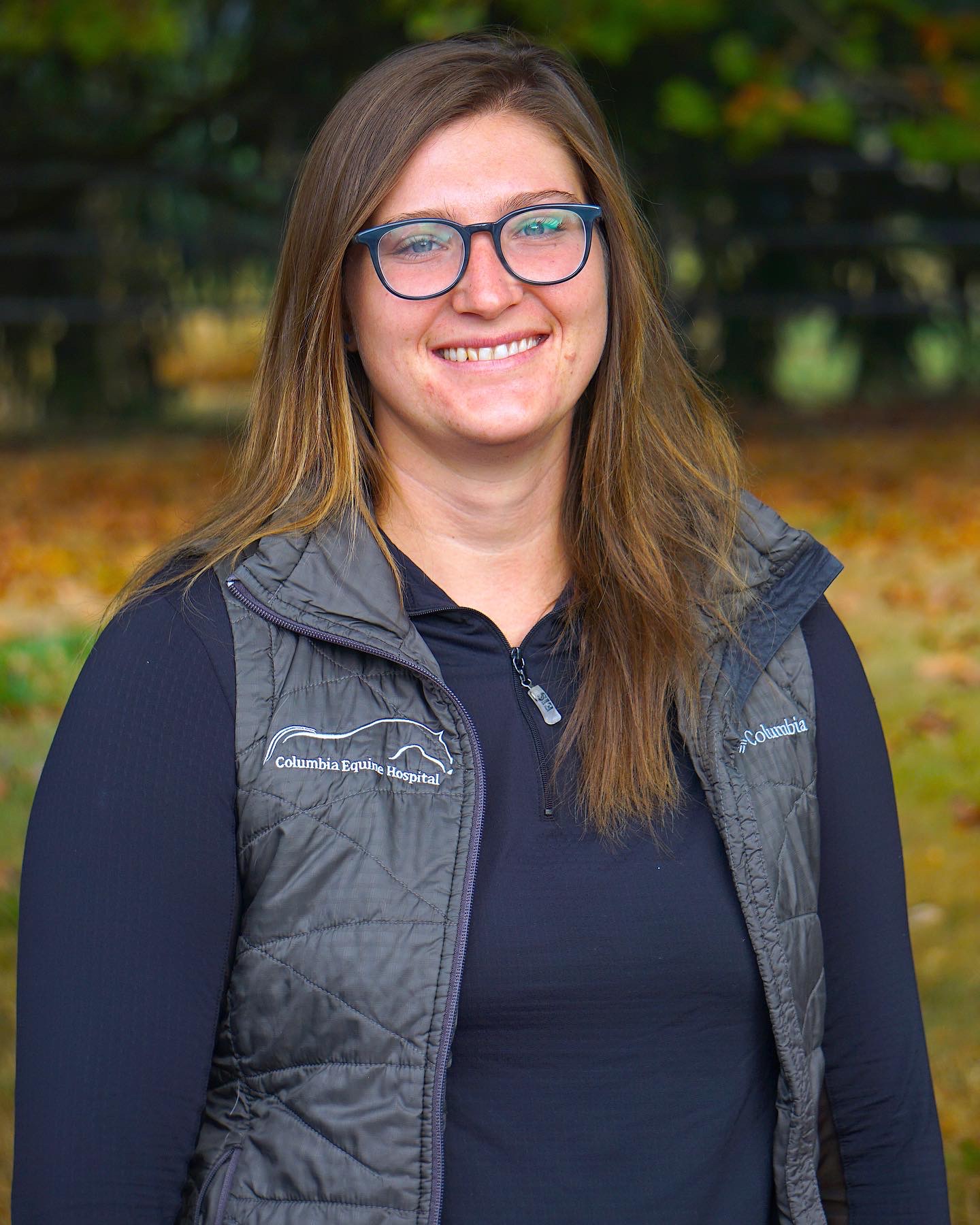 Dr. Danielle Price grew up in Southeastern Idaho riding jumpers, skiing, hiking and camping.
She studied biology at Colorado State University and earned her DVM from Washington State University. Throughout college and vet school, Dr. Price contributed to equine research in reproduction and pain management, and volunteered on multiple veterinary teams that provided essential care to underserved communities in Nicaragua. Following graduation, Dr. Price completed a rotating equine internship at Littleton Equine Medical Center near Denver, Colorado gaining advanced knowledge and skills. Prior to joining Columbia Equine Hospital she was an associate veterinarian for several years at Steinbeck Peninsula Equine Clinics in California. During that time she managed a large EHV1 outbreak in conjunction with the state veterinarian. She has particular interests in dentistry, lameness, wellness and emergency.

Outside of work Dr. Price enjoys eventing with her off the track Thoroughbred, and numerous outdoor activities with her husband and their two dogs.

Dr. Dave Klugh graduated from Washington State University College of Veterinary Medicine in 1981.  Dave’s interest in equine dentistry led him to become certified at all three levels of expertise (basic, advanced, and examiner) by the International Association of Equine Dentistry (IAED), where he currently assists in oversight of all certification procedures as a member of IAED’s Certification Committee.

In 2003, he became the first Equine Fellow in the Academy of Veterinary Dentistry, laying the groundwork for further elevation of equine dentistry to the level of a specialty in veterinary medicine. 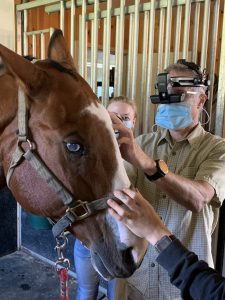 Dr. Scherlie graduated from UC Davis School of Veterinary Medicine in 1985 and completed a

residency in veterinary ophthalmology from the New York State College of Veterinary Medicine in 1991. He has practiced in the Portland Metropolitan area since 1992. 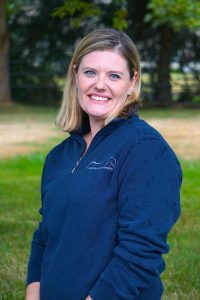 Megan is a Portland local who joined the practice in 2006. She grew up riding and showing Tennessee Walking Horses. Currently, she enjoys managing her small farm in Eagle Creek with her husband and young daughter Ava. They have two dogs, Suki and Zoe, two Tennessee Walkers, Kojak and Penny, and a whole gaggle of chickens. Megan spends her free time hiking and camping with her family, gardening, playing in the kitchen with her daughter and riding. 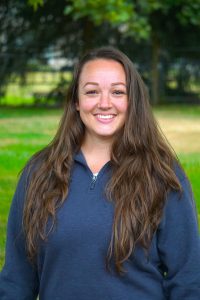 Tia joined the Columbia Equine team in 2021.  Tia is an Oregonian that grew up loving horses, and currently owns Winter, a lovable Arabian. 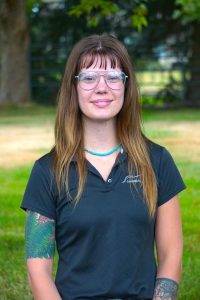 Morgan joined the Columbia Equine team in 2022.  Born and raised in the PNW, Morgan can be found in the woods, city, or anywhere in between.  She started riding when she was 12 and never looked back.  Her and Bird (dog sidekick) love exploring Oregon’s trails on horseback or foot.  She enjoys local shows, antique stores, and good eats. 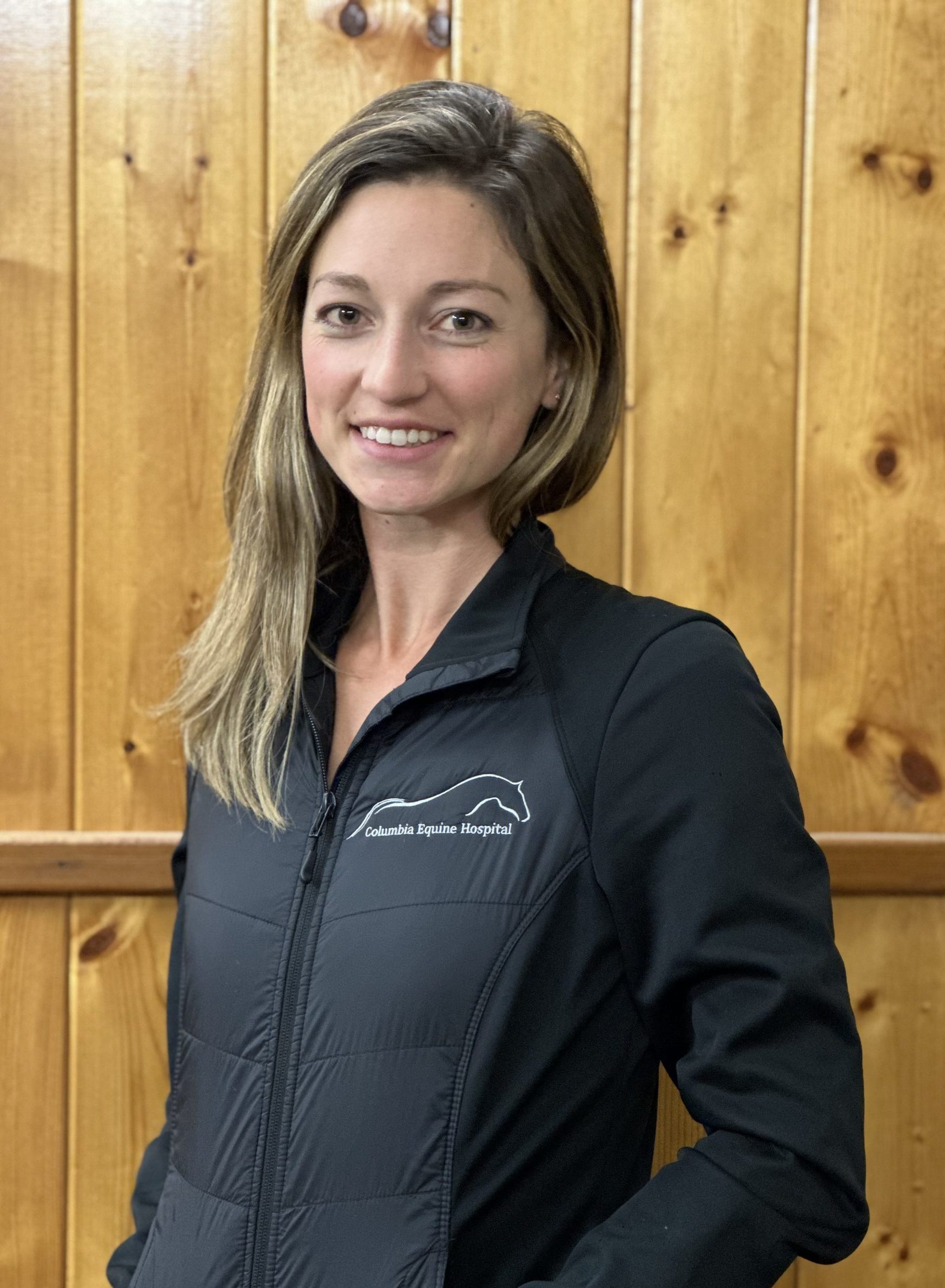 Michelle is an Oregon native who joined the Columbia Equine team in 2016. She grew up riding and showing horses in the Portland area. When she is not helping out around the practice she can be found with her Quarter Horse mare Callie chasing cows and trying their hand at reining. 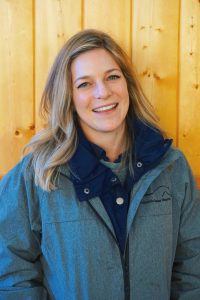 Mallorie was born and raised in Las Vegas, NV. She started riding horses at a young age in multiple disciplines and competing in local club shows. Mallorie went to college at New Mexico State University where she was a part of the NCAA Equestrian Team riding hunt seat as well as an instructor for the NMSU Therapeutic Riding Program. She graduated in the spring of 2011 and received her bachelor’s degree in Animal Science with an emphasis in Equine Management.

Mallorie moved to the PNW after college with her husband Kyle, her huskies, and her quarter horse mare Hallie. She has enjoyed planting roots here in Oregon and raising her daughters Audrie and Charlotte to be animal lovers just like their mom. She has been a part of the Columbia Equine team since March 2012. 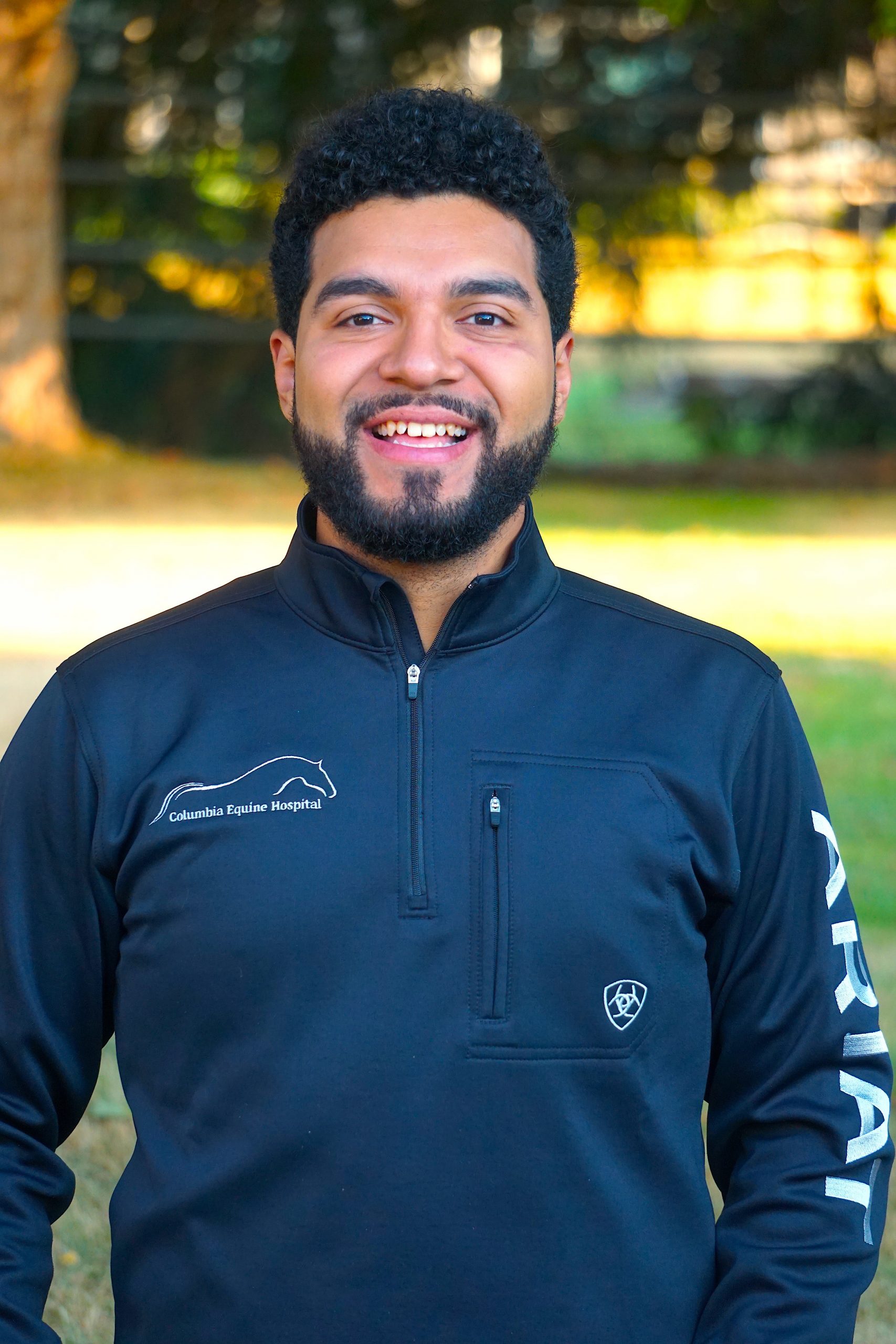 Josue joined the Columbia Equine team in 2021.  An Oregonian, Josue grew up around horses with his grandfather driving him to ride everyday after school.  Josue obtained his veterinary assistant training at Carrington College, and is a member of Rancho El Misterio, competing in Manganas A Caballo. 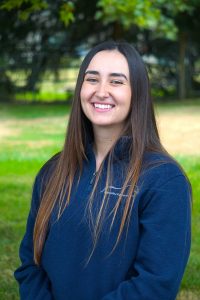 Sydney joined the Columbia Equine team in 2021. She went to college Cal Poly SLO where she was a part of their Western Show Team, competing in horsemanship. She graduated with a BS in Animal Science, concentrating in pre-veterinary medicine and equine science.

She spent her last two years of college starting 2 year old horses for the Cal Poly Performance Horse Sale. Her three horses raised $33,000 for the program. When she cannot be found at CEH she is working for a local reining trainer or hunting down the best cup of coffee in the PNW. 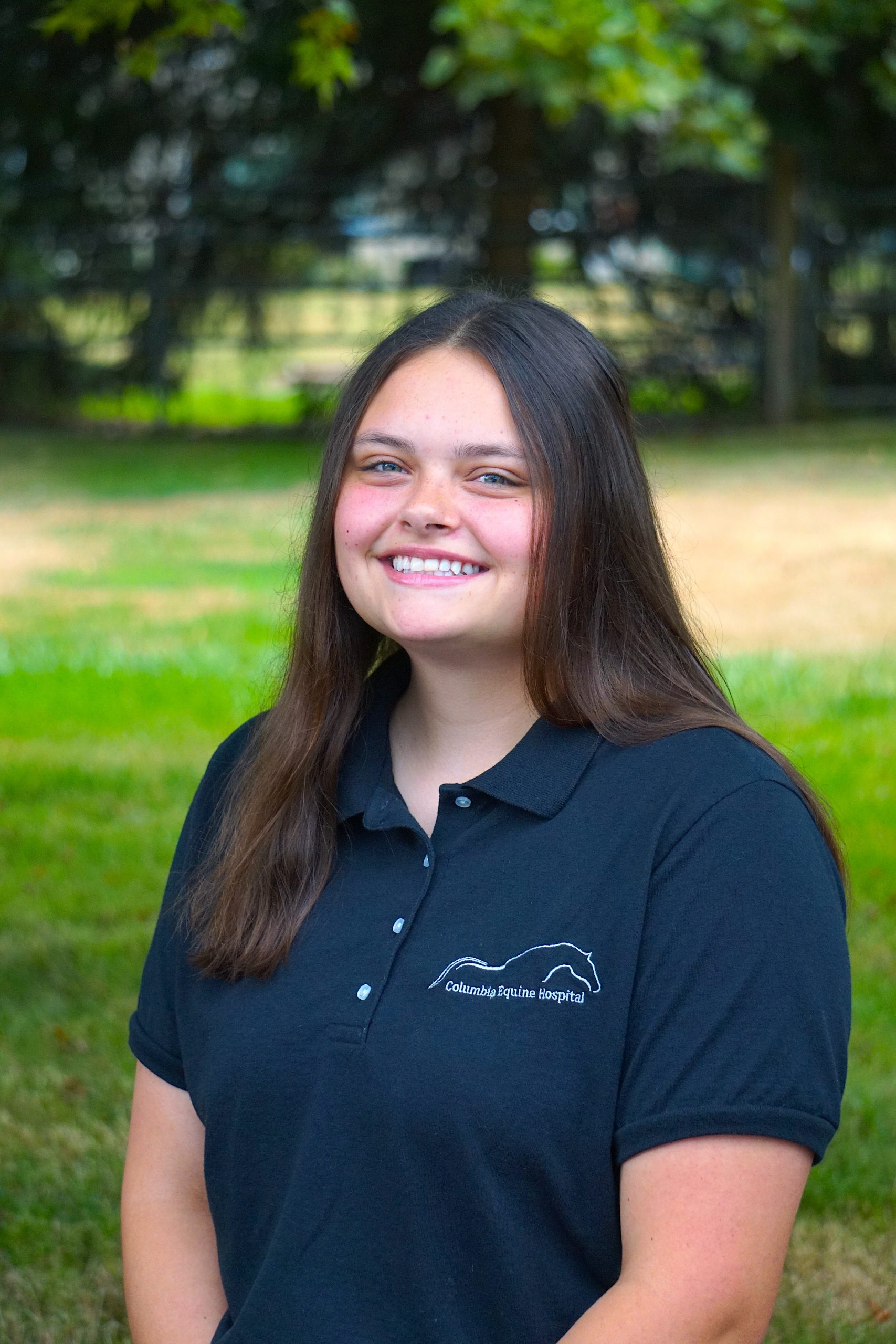 Savannah joined the Columbia Equine team in 2021.  Savannah hails from Alaska, and enjoys spending time in the snow whenever she can.  She also enjoys spending time at the barn with her 2 horses Doc and Phoenix, as well as riding dirtbikes and Strawberry Acai Refreshers. 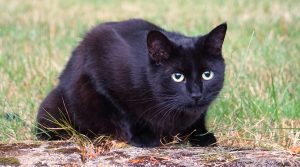